Why we will never show ads in our mobile games

In the challenging business around mobile games, ads have emerged as a popular way of making money, especially for smaller independent developers. It’s easy to see why. They pay well, partly thanks to the success of other service-based games (many of which are not themselves ad-supported). They offer a well understood and relatively predictable revenue stream that is very easy to integrate in any game, often with minimal or no design changes. In an era where everyone is talking about confusing metrics and reworking designs so they’re more suitable with the free to play model, showing ads can be a convenient fallback that gives piece of mind from all that.

When walking into a challenging and uncertain environment like mobile games are, it’s generally a good idea to stay flexible and keep an open mind on different approaches. This of course includes business models. Despite that, when choosing a business model for our new mobile games team, we are comfortable saying that we will never, for any reason, allow ads to be shown in Hades' Star or any other games we might make in the future. This post explains why.

While harder to make and maintain, service-based games (i.e. games that constantly evolve over many years of constant updates) have many advantages over one-off games on the app stores. They offer the game multiple chances at visibility and coverage, instead of just once at launch. They are better suited to building a community over time. I believe the next generation of truly social games can only be delivered by game services, not fire-and-forget products.

For these and other reasons, we have decided to only build service-based games. Ads do not belong in these kinds of games.

I see service based games as a long term and constant interaction between the developer and the player. If the player likes the game and there is enough content, they stick around logging in daily for months or even years. Every single time they log in, and over time, that player receives messages from the developer that tells them a lot about what the developer thinks of the game and its players. Does the game feel balanced and fair? Does it reward the time players put in over time? Do the updates address the right issues? Does the user interface facilitate the right kinds of tasks, especially ones that need to be repeated daily? Depending on the game type, there are countless little and big design decisions that affect different player's perception of the developers and the game over time.

These decisions can create, solidify, erode or destroy trust between the developer and players.

Operating a service-based game can be seen as a mission to build trust with players, through these constant interactions and back and forth messages. Building trust doesn't mean everything has to be perfect, or that problems have to be fixed instantly, or that developers only work on the features that the majority of the players think they should implement. It does mean showing the players that the development team is made of capable people who genuinely care about the game, listen to their community, and have a solid vision for the future. This kind of trust can be a massive driver of retention. Players *will* stick around even when a game's late content is severely broken, and even help fix things, if they have built enough of that kind of trust with the developer.

Asking players to watch ads to access the game, or to progress faster, is the worst kind of message a developer can send to their players. 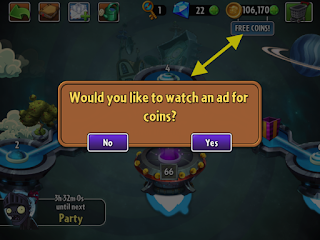 When I see a popup like the above in a game, I might view it to get the rewards, but the following things also happen:
In addition, ads require a huge number of players constantly watching them to work. Building long term trust works slowly over time, and is much harder to do with very large player bases that grew fast, like many successful ad-supported games have. We'd much rather build trust directly with a small, very passionate segment instead and grow slowly from there.

What about in-app purchases?

Some might argue that in-app purchases are also an annoying experience that destroys player trust, similar to viewing ads. Though in app purchases can definitely be as bad (or worse) depending on the implementation, there are fundamental differences:


There are a lot of people whose salaries depend on every game showing as many ads as possible, coming up with reasons why ads make sense for developers. They go as far to argue with a straight face that players love viewing ads. Our inbox is full of their offers to "help". We'd rather focus on creating meaningful relationships with our players instead.